Generally, the only thing that I’d change with french toast is using soymilk as opposed to cow milk, but this time, I tried to substitute the egg as well in order to make this recipe vegan. It was surprisingly easy and even tastier than when we used egg. We now have a go-to french toast recipe, and I’m going to pass it on to you.

All you need is 1 tbsp flour per each 1/4 cup soymilk, so adjust this as needed. This recipe  makes about 4 slices of french toast, but it all depends on the kind of bread you use and how soggy you make it before frying. I like them soggy. 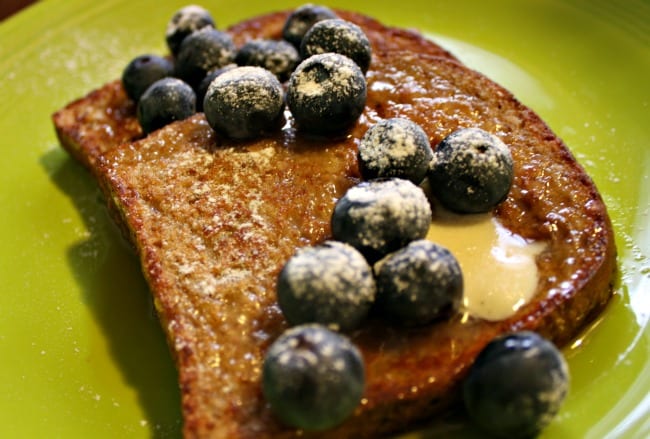 Pour the soymilk into a container that’s a little bigger than the slice of bread. I use plastic sandwich containers. Whisk in the flour with a fork, and then add in the spice and whisk a little more.

Dip a slice of bread at a time into the mixture, and flip to get both sides. I let it sit for about 5 seconds before flipping it over.

Fry in a hot pan with a little bit of cooking oil until both sides are a toasty brown and serve with some maple syrup, butter, and powdered sugar. We love blueberries, so we added those, too.

Do you have any french toast secret ingredients?