Following up the first two easy posts is this super simple recipe for a delicious vegan Alfredo sauce, and it is non-vegan approved. It’s so easy and uses nutritional yeast (or nooch as I’ve seen it called) which gives it its cheesy flavor. It’s the first time I’ve cooked with nooch and I’m planning on using it in the future for other recipes.

I found the idea for this sauce on The Fitchen, but did some tweaks and changes to it based on personal preference. She calls for a lot more nutritional yeast, but I figured I’d start small with 1/4 cup and was happy with the level of “cheese” I got from that. I also used fresh basil instead of dried basil and perhaps a bit less coconut milk.

This recipe will be enough for two hungry folks.

Pour all ingredients in to the food processor. I tore up the basil leaves a bit before putting in to make sure they’d be well combined. Blend until smooth, and warm up over the stove before pouring over pasta. 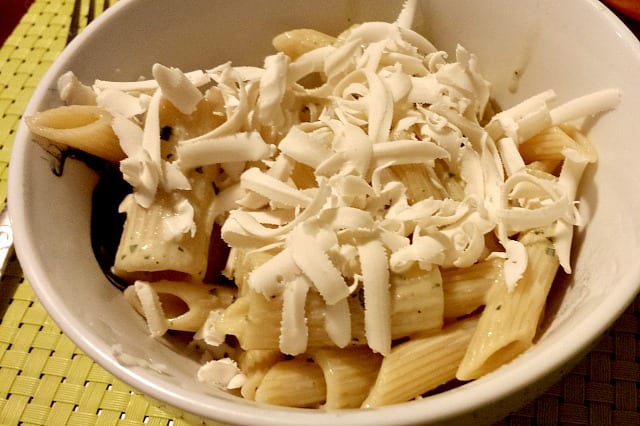 I used penne pasta in my recipe. For me, it involved boiling water, adding the pasta, cooking for about 13 minutes, and the pasta was perfect, but follow the directions on the box to ensure you’re preparing it as recommended. I topped my pasta with some Teese mozzarella cheese as well.

Serve with a green salad and crusty bread.