Thanksgiving is right around the corner, and chances are, you’ve been tasked with making something for whatever kind of get-together you’re attending. I always jump to make pies because they’re so delicious and fun to make. Since we still have many (many!) picked apples in our fridge, I decided to make an apple pie. I used Jonagold but you’ll be in good shape with apples like Granny Smith or Gala apples, too. 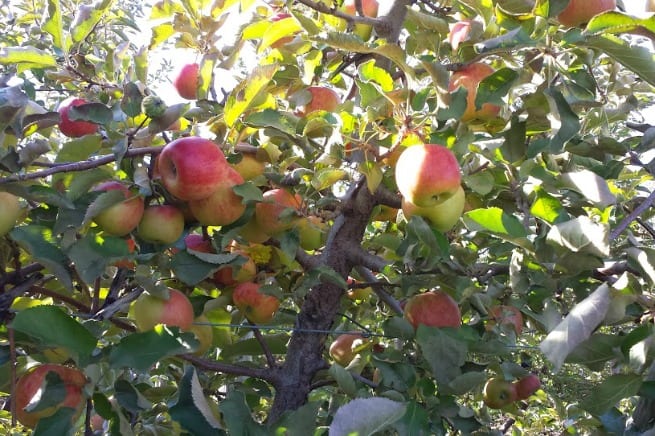 Prepare the pie crust first. The key to a good pie crust is cold butter cut into chunks. Pour the flour and salt into a medium sized bowl and mix well. Then add in the chunks of cold Earth Balance. You can either cut in the butter with two knives working diagonally, or work it in with your hands. I usually just use my hands. Work it in until the flour takes the form of large crumbs and the butter is well incorporated. Add in the water and work into the dough.

Place the dough on a floured surface and either roll out once or work it into a circle. Don’t work the dough too much, because it can get tough. Put it back in the bowl and place in the fridge for at least an hour. It’ll be easier to work with after it’s chilled.

Now it’s time to prep your filling. Peel and slice the apples and place into a large bowl. Sprinkle in the sugar, flour, and as much pumpkin pie spice as you prefer. I never like putting a measurement on things like pumpkin pie spice. Put a couple of shakes of salt in as well and toss around until apples are well coated.

Preheat the oven to 425 degrees.  Take the dough out of the fridge and separate into halves. Roll out one ball of dough and place in the bottom of a lightly greased pie tin. The dough should rolled out enough to extend over the sides of the pan a little bit.

Add in the apples. The first time I made this pie, I worried that it was going to be too full of apples, but I’ve since realized that’s pretty much impossible. Feel free to have the apples in a bit of a mound.

Roll out the other ball of dough and place over the filling. Pinch both sides of dough together and make some venting in the middle of the crust. 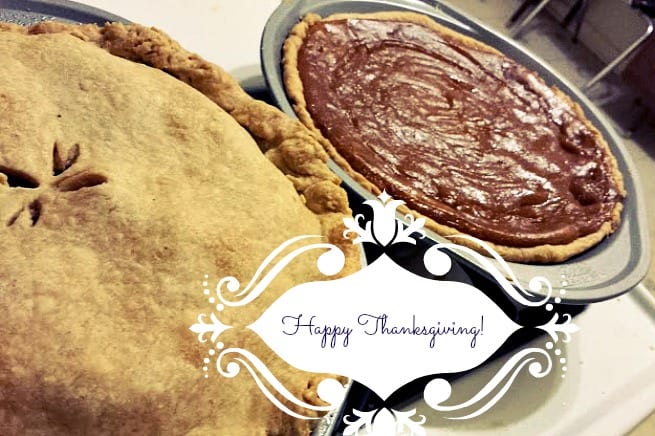 Bake pies in the oven for about 40-45 mins or until the crust is golden brown. Enjoy with a large scoop of Luna and Larry’s Vanilla ice cream (or whatever your favorite dairy-free a la mode choice is).

What’s your favorite pie to make at Thanksgiving? If it’s gourd-related, you’re in for a treat soon!