In my childhood, summers meant a lot of camping, which also meant a lot of time at the Dells and in Door County. When we went to the Dells, we almost always made a stop at The Cheese Factory.

Now, I know what you’re thinking – why would I be writing something about a restaurant that had “cheese” in the name when I’m dairy-free? Stay with me.

The Cheese Factory started as a vegetarian restaurant, and my mom and I would drag my dad there to eat. We were both vegetarians (well, sometimes pescatarians) and he is pretty much the biggest meat eater you could ever meet. I think he thought the food at the Cheese Factory was okay, but that he would prefer to eat bacon with his breakfast. Fair enough, dad. You like what you like.

In a moment of nostalgia, I remembered The Cheese Factory and mentioned it to my fiance as a potential brunch spot on our way home from Rhinelander. It was only a little bit out of the way and would be a good halfway point to stop and eat before hitting the road again. Being someone who has grown to really like vegetarian food, he agreed.

When we walked through the door, the host asked us if it was two in our party, and immediately after, made sure that we knew it was a vegan restaurant. We exclaimed, “yes!” and were brought to our table. 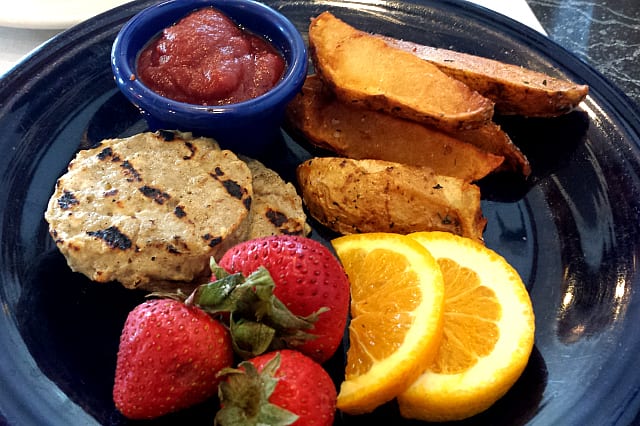 The hot chocolate came out first and was delightful and creamy. It came with a vegan marshmallow (I didn’t ask but my money’s on Dandies), and brought back a lot of memories for me of when I’d order hot chocolate to go with my parents’ coffee orders at brunch spots.

Our meals were both very good. The potatoes were seasoned very well and the waffles came with apple chips as well as a fried banana. It was pretty standard brunch fare, with the exception that everything was vegan. I wasn’t all too adventurous, but the next time I go, I want to try their vegan chimichanga. That sounded very interesting.

It was definitely a blast from the past for me to visit The Cheese Factory after so many years of not stopping in. The last time my fiance and I were in the Dells, we had only been dating for a few months, and he had not yet become an adventurous eater. I’m very happy to report that in our future Wisconsin Dells trips, we’ll make sure to make The Cheese Factory a regular stop. I’m even happier now that it’s cheeseless!

What dairy-free restaurants have you found on the road? Share them in a comment below or email me at dairyfreestate@gmail.com so I can visit them and post about them, too!

Yes, You CAN Can! Food Hacks: Peel Peaches in a Snap!