I don’t make mashed potatoes as often as I probably should. They always seem like they’re going to be more of an undertaking than they actually are. This past week, I ended up making mashed potatoes twice (the first time, they were so tasty, we forgot to snap pics before we dug in). We really enjoy eating red potatoes and fingerling potatoes, and it’s nice to have a different way to eat them with your meals. This recipe is really easy and most of the time comes from the potatoes boiling, so you can work on other things while you wait for them to finish up.

Scrub the red potatoes thoroughly, since you’ll be keeping the skins on for the mashed potatoes. Cut into quarters and put into boiling water. Boil for 20-25 minutes. They’ll be soft when they’re ready, and the skins might be separating from the potatoes a little bit, but they shouldn’t be so soft they’re falling apart.

While the potatoes are boiling, saute the minced garlic in a frying pan with the olive oil on medium heat for 2-3 minutes. Take off the heat and set aside for later.

Once the potatoes are ready, drain the water and put in a bowl. Add the butter and garlic right away, and some salt and pepper, and start mashing. 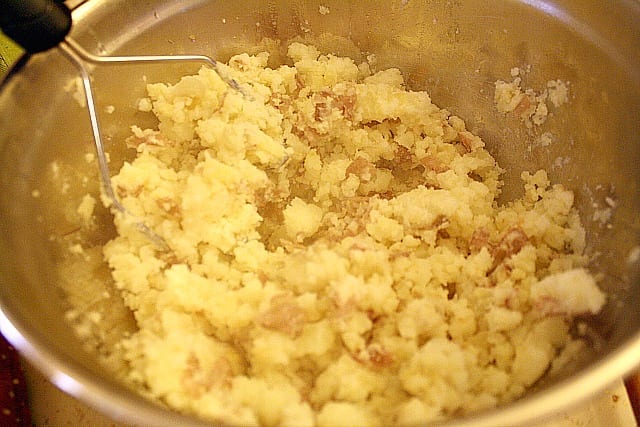 Once the potatoes are broken down into small crumbles, add the sour cream and milk and mash some more. The potatoes should be fluffy after a couple minutes of mashing. Test a little and see if you need to add more salt and pepper. Serve immediately while the potatoes are still nice and warm. Should feed about 6.