The time has come! I was finally able to get around to revising one of the family recipes that came from my grandma’s house. This first one proved to be really interesting, as it took more than one try to get it right. The recipe was originally for a no-bake cheesecake, which called for cream cheese and Dream Whip, and I ended up making it into a cheesecake you bake, using coconut milk and vegan cream cheese, but I was still able to retain the spirit of the recipe by using a pretzel crust.

The recipe originally called for slightly more sugar in the crust (¾ cup) and in the filling (1 cup) and that ended up tasting very sweet to me, so I dropped the measurements down. Feel free to try adding more sugar if you feel like you need it, but trust me, with the pie filling on top, it should be plenty sweet.

When I made the recipe, I prepped for two pies, so the recipe below is halved based on what I used. A whole bag of Newman’s pretzels was split between the two pies, and I used a large jar of cherry pie filling to top, which resulted in me still having some extra. (By the way, I used Wienke’s Market cherry pie filling, which is really delicious and uses Door County cherries.)

I’m feeling really good about what came out of this recipe, but I may come back to it to tweak a little more. I also hope to dive back into more family recipes soon. It was a lot of fun to see what dishes like this were like back when my grandmother was swapping recipes with friends.

Preheat the oven to 350 degrees and start with the crust. Take the pretzels and either roll until fine, which proved difficult for me as the bag punctured when I rolled over it, or put into a food processor. Process until fine. Melt the Earth Balance and mix with sugar into a bowl with the pretzel crumbs.

Take a pie tin and fill with the pretzel crust mixture. Press firmly to coat the bottom and sides in a layer of pretzel. Set aside. 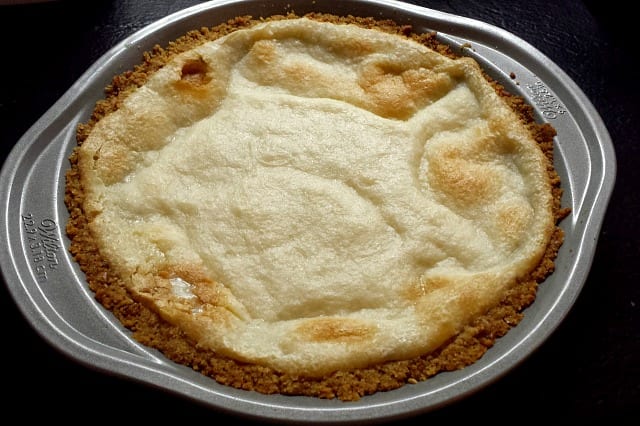 Now it’s time to make the filling. Blend the cream cheese, coconut milk, and sugar together until smooth. Spoon on top of pie crust. Bake in the oven for about 35 minutes or until the top gets brown (see pic) – the cheesecake should have set for the most part but might still be a little wiggly. If you want it to be more set, drop the temperature of the oven down to 200 degrees and let firm up longer.

Place the cheesecake in the fridge for at least a couple hours to cool. Once chilled, top with cherry pie filling, or whichever fruit you prefer, and serve.