I’ve lived in Milwaukee for years and have eaten at quite a few places that offered vegan pizza, so I have no idea why it took me so long to get to Ian’s. Maybe it’s because Classic Slice and Transfer are so close by. Anyway, we went recently to buy a vegan whole pizza and some vegan side sticks, and man, were they tasty!

We ordered the vegan mac and cheese pizza, the dairy-free version of one of Ian’s most popular pizzas. I made my fiance eat it with me to make sure that it would be approved by dairy-eating folks, and he gave it a thumbs up! I was pleasantly surprised with the side sticks as well, which were very flavorful and paired well with the vegan marinara and vegan ranch that we ordered. I’m not really a big ranch flavor person so I stuck with the marinara mostly, but he really enjoyed the vegan ranch. 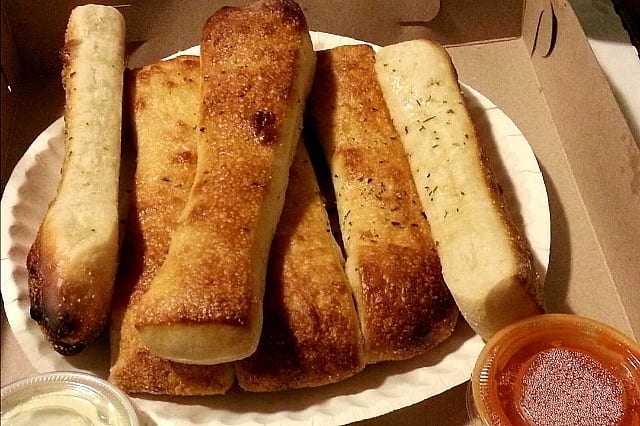 You can get vegan pizza any day of the week at Ian’s as long as you’re planning on ordering a whole pie. Here is the slice schedule for anyone who is interested. I hit Ian’s up because I was having a hard time finding all of this info in one place on their site:

Ian’s also told me that some of their weekly and monthly specials can be veganized, so if they seem appetizing to you, ask! You might be surprised what they can turn vegan in that magical kitchen.

For more information on the products they use, check out their posts about vegan pizza here and here. They mentioned to me that they’ve been using Upton’s Naturals and Daiya, which are two of my favorite brands, so I’m definitely looking forward to coming back to try more pizzas.