Welcome to another episode of Dairy-Free State! This week’s guest is Annie Wegner LeFort. Annie was a pastry chef around the same time she realized she needed to go gluten-free. What a torturous thing to be surrounded by temptation as you’re changing your diet!

It’s been a few months since I spoke to Annie, so I do have a few updates based on her new website and offerings. While she mentions Mindful Palate in the interview, you can now find her information at Eat Move MKE. From the site, you can see all her upcoming yoga and cooking classes, as well as services for custom classes encompassing both cooking and yoga.

On this episode: Cooking & eating with a non-celiac gluten sensitivity

Annie has a non-celiac gluten sensitivity. She noticed changes in her energy level, joint pain, and mood issues, so she worked with a nutritionist to do some testing and solidify her suspicions that she needed to change her diet. Starting with an elimination diet, she learned that she needed to avoid gluten (like I said, something pretty difficult to find out when you’re a pastry chef!), and that has been the main culprit. Annie’s diet is also mostly plant-based.

If you’re looking for instruction on food preparation, preserving, and gluten-free cooking, especially if you have or want to have a plant-based diet, Annie’s the perfect person for instruction.

Since both of us have been in the restaurant industry, we talk about our experiences both ordering food and taking orders from people with special diets. Listen in for our advice for servers, kitchen staff, and customers.

While we believe that restaurants should be able to accommodate basic dietary restrictions, it’s important for customers not to expect miracles from businesses built to serve a wide array of people. While I’m used to asking for dairy-free food, and Annie’s used to asking for gluten-free food, for example, I wouldn’t go to a restaurant expecting full accommodation for SIBO. 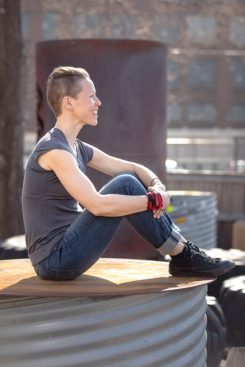 One note on that, as well: I misspoke about one aspect of SIBO in this podcast. It was a few months ago, and I’m learning more about it every day. SIBO is not about having bad bacteria in your gut. It’s more about having bacteria grow where it doesn’t belong. Just wanted to clarify that quickly. I’ll be posting more about that in the coming months, including recipes I’ve been using and diets I’ve tried and found success with to manage the condition.

One other fun coincidence is Annie talked about repurposing her grandmother’s recipes, which is something I’ve been wanting to dig into. I’m hoping to get at least one of those posted per month; just waiting to get some better audio equipment for my camera. So look for that soon!

Some of the resources we share on the episode:

S1E7: Jess Marie Larrain Kitchen Hacks – I Know Them, I Love Them, I Got Interviewed About Them