In Milwaukee, Braise stands for many things. Whether it’s the RSA, home delivery, culinary school, CSR, or restaurant that comes to mind first, all elements of Braise are special and enhance the community aspect of food in the city.

I recently sat down with Dave Swanson, owner of Braise RSA (Restaurant Supported Agriculture) and head chef at Braise Restaurant, to discuss the many facets of his business. When I first got there, we got to talking about food trucks, which brought him to the topic of food trucks that used the RSA.

Swanson involves up to 400 farms in the RSA, generally 200 on a regular basis. The farms bring their produce in and then Braise takes care of delivery out to restaurants and food trucks. About food trucks he said, “it’s great for them, because sometimes they buy in smaller quantities, and they can’t get good local products on those small quantities.” The RSA, being equipped to distribute whatever quantities a business might need, is almost tailor-made for these small food truck operations.

For those who were curious like I was about which farms were involved with Braise the most, never fear, there is a chalkboard in the lounge area that lists farms seen most on Braise’s menu (see below). 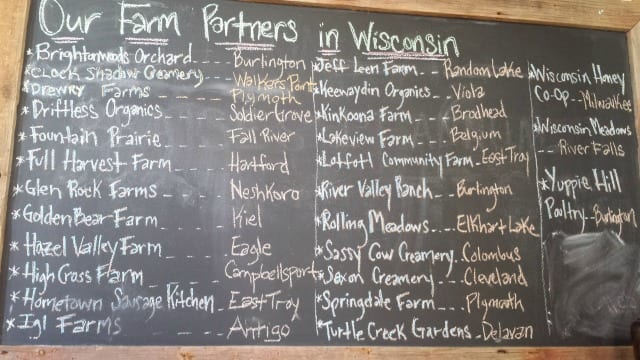 The RSA is designed to support food businesses in Milwaukee and farmers by taking the worries of delivery off their plate, but there are many ways that the average consumer can get involved in Braise as well. The first way is home delivery.

Think of home delivery almost like a CSA with more choice. Customers can sign up for the membership that suits them, order what they want, and they get it delivered to their door. Swanson recommends it because there are more options available to home delivery members that they probably wouldn’t get in a CSA. “They can get anything from grains, vegetables, fruits, meats, dairy, cheese, flowers, and fish, all from Wisconsin. A lot of times, people will shop the farmer’s market…and [they] run for 20 weeks out of a 52 week season, so that’s 32 weeks where they can’t shop at farmer’s markets.” He recommends CSAs and farmer’s markets, of course, but he sees RSAs as a good supplement to these offerings. “You’re not forced to take a certain amount… Problems with CSAs across the board are too much of one product, too much product altogether, and the fact of things being delivered every week no matter what happens, because you can’t tell the plants to stop.”

The RSA and home delivery working in conjunction are also helpful to Swanson when, for instance, a piece of cattle enters the equation. Customers can use some of the cuts of meat and the rest can be left for restaurants, so none of the cow goes to waste.

The next program they offer is the CSR, which is the Community-Supported Restaurant. Fans of Braise can opt in to be members that invest in the restaurant. The perks with being a member are very impressive (in fact, I’m hoping I can convince my boyfriend to go in on a membership with me next year). The beginning level of membership starts at $250, and comes with a $300 gift card that is redeemable for dinners, cooking classes, or events with Braise (the only event excluded is Tour de Farms). The next level up, $500, comes with a $600 gift card plus a 6-month membership to home delivery. To say these memberships pay for themselves is an understatement. 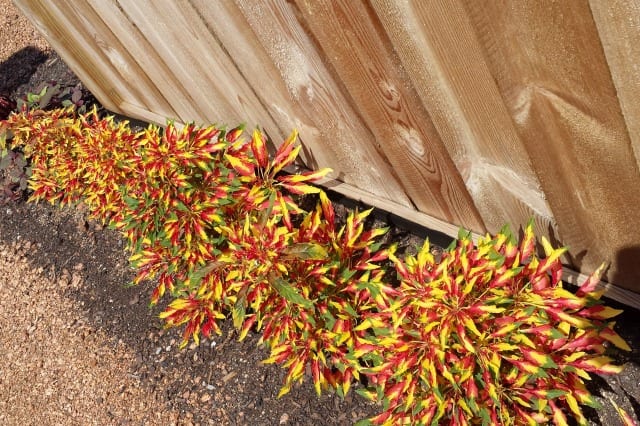 In turn, membership investment allows Braise to launch programs like their rooftop garden. “We’re looking at launching a solar hot water system for the restaurant, so we’ll have solar panels [on the roof] and that will be heating the water up that we use.” Every year, new programs come into play with the help of the CSR. “We just launch new and new initiatives in regards to that, whether it be urban composting with worms, solar hot water, greenroof…low flow valves, dual-flush toilets…having skylights in the restaurant.” The initiative that is most obvious, however, is the creation of the RSA in the first place. Sourcing locally creates a smaller impact on the environment than buying produce across the nation or globe would.

Outside of these programs, there are others, including Braise on the Go, a traveling culinary school, plus a number of farm walks and tours. 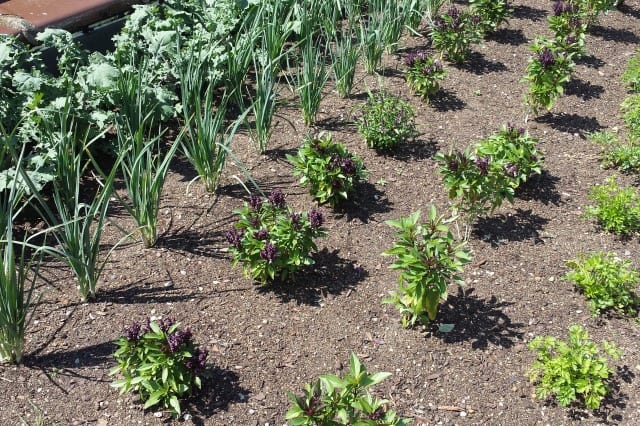 I attended one culinary class recently about coffee brewing techniques,  hosting by Anodyne, and Dave went into more detail about the kind of classes they offer. Tuesdays are lecture series classes. “What we try to do on those nights is…highlight our local producers, like Clock Shadow Creamery, Purple Door Ice Cream, Anodyne, Rishi Tea, or our farmers or wine producers…the idea is they can talk about their products…how it impacts using local ingredients, and, of course, how it dovetails into what we’re trying to do here.”

Thursday classes are all about demonstration. You can visit their calendar to get an idea of what classes are going on now, but everything from knife skills, to bread making, to butchery has been offered in the past. Swanson’s philosophy is “if you can teach them how to cook and be more comfortable and confident in the kitchen, then they’ll be more apt to use something from a farmer’s market when they shop there.”

So, to get a full picture of what Braise can mean for someone, think about it this way: “It’s you as a consumer having the ability to procure through the home delivery program, learning about it through the culinary school, experiencing these farms by going to an event with Braise on the Go, and then seeing how that all ties together with the restaurant.”

Cooking using local ingredients isn’t anything new for Swanson. He worked in a number of French restaurants. “The European French model is buying food that day, preparing it, and that’s what you do.” Working in Illinois, Swanson noticed that many farms they sourced from were based in Wisconsin, and he had those relationships established when he launched Braise in 2004. His intention was to make life easier for the farmers: “If we have 10 restaurants that want to source locally, rather than the farmer come up and drop to 10 restaurants, it’s better for them to come to one area than to have whoever does that just deliver it out…Some restaurateurs don’t like it; they think it’s competition or whatever, but they’re not thinking of the big picture.” 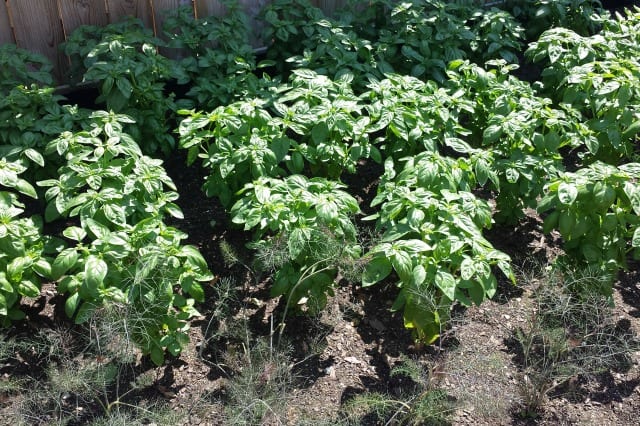 Of course, eventually I had to ask the question that is on a lot of my readers’ minds, and that’s how easily it is to eat at Braise if you have a special diet or a food allergy. On their menu, Braise has markers that indicate gluten-free and vegetarian options, but don’t worry about asking the servers questions. Swanson adds, “When more people ask [about allergens], we’ll make restaurants understand that there’s just more of this customer out there.” You hear that, readers? Strength in numbers. Don’t be shy about sharing your allergies to make sure your dining experience is enjoyable (and not uncomfortable later on, if you know what I mean).

Another thing that’s sometimes a drag about having a food allergy is being limited to a few items on a menu at a certain restaurant, but the nice thing about Braise is the menu changes every day. Sometimes it may be as small as a specific kind of tomato or berry, but it’s all based on seasonality and availability of the ingredients.

I asked Dave what some of his favorite moments were in the growth of Braise, where he felt like things were really working, and he said his favorite moments are “when [my staff and coworkers] get it…that’s when it’s special. When they understand what it is, because it takes a lot of effort to do it. You don’t show up at 3 o’clock, punch a time clock, open up a box, snap open a bag, put it in a pan, heat it up, and you’re ready for service at 5 o’clock…it doesn’t work that way. People understand, ‘I gotta plan for what’s happening.’” 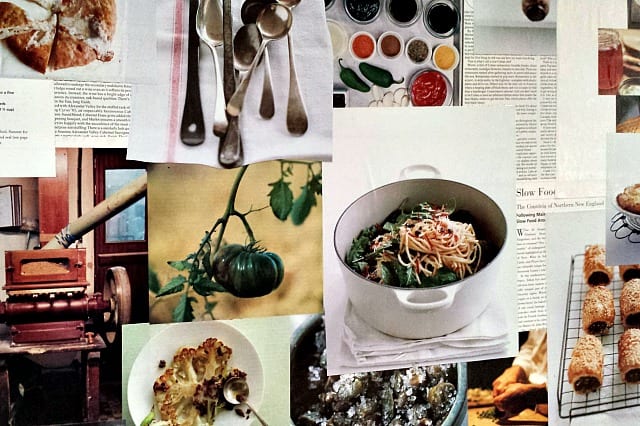 With this much thought and care going into every dish at Braise, it almost sounds a little intimidating. I asked him what he would say to someone who might be intimidated by the concept:

“That’s funny to me, to be intimidated (laughs). I worked in all high-end restaurants all my life and the reason why I did something much more casual, especially having the food come out here, where I’m expediting right there (motions to an area that faces the bar and dining room) I can talk to my customers, whereas in high-end restaurants…you never had a chance to interact with customers and the pricing was so out of people that I know in my family’s price range that I would only see them once a year. I wanna see people in here once a week and have that kind of camaraderie with them, so you don’t have to feel intimidated here. If you wanna lick off your plate, it’s my living room, you can go ahead and do that…Service doesn’t have to be so formal to be good service. Good service is an attentive server knowing what you need before you know you actually need it.”

Wrapping up a very informative interview, I think Swanson sums up Braise best when he says: “Come here, and you’ll learn what good food tastes like.”