Any time I find something new at the store, it’s like a mini Christmas. Especially if it’s something non-dairy in the “dairy” section. Last week, I found Chia Pods at my local Whole Foods and couldn’t resist trying one.

This is the first time I’ve tried anything with soaked chia seeds in it. The Chia Pod reminds me of tapioca pudding but nowhere near as sweet. Actually, there are no sweeteners in the pod; it consists of vanilla paste, coconut milk, chia seeds, and cinnamon. Very simple.

While it looks jiggly, spooning it proves that it’s a lot more solid than it seems. Eating it had a bit of a learning curve, just because the consistency is a little unusual (but not off-putting, which is important). 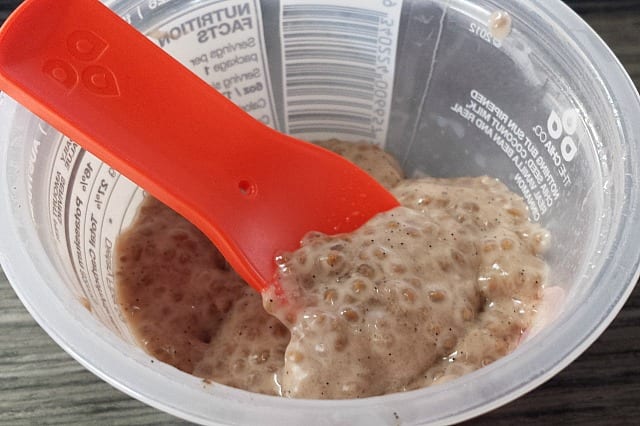 Bottom line: It was definitely a creamy and nutty taste I warmed up to the more I ate it, though I was a little bothered because it wasn’t as sweet as I expected. However, it might be something I’d be more interested in eating if I were in the middle of a cleanse or strict diet regimen as it’s a little sweet but not so much that it’s derailing healthy eating. I’d like to try the mango one soon as I’m guessing it would be a little sweeter.

Have you tried the Chia Pod yet?